Why Do Cats Sleep so Much?

Catnaps are defined as periods of short, light sleep. However, anyone who has ever had a cat knows that real cats do not catnap. They just sleep…all the time. In fact, on average, cats sleep between fifteen and twenty hours per day.

However, there is still reason to wonder why cats sleep so much?
There are a few reasons for this:

Cats need to sleep to save their energy if they need it to either hunt or survive. In the wild, they were hunters. Their hunter mentality causes them to sleep during the day and be more active at night when their instincts tell them they should be hunting.

A cat’s instincts are a lot different than those of a human’s instinct. While humans sleep at night, cats were (and are) on the prowl at night. After all, the best time to hunt is when the rest of the world is asleep.

However, kittens and senior cats sleep more often than a healthy adult cat for the same reasons most species’ babies and elderly sleep a lot; babies are growing and the elderly need a lot more energy to perform mundane, natural tasks. 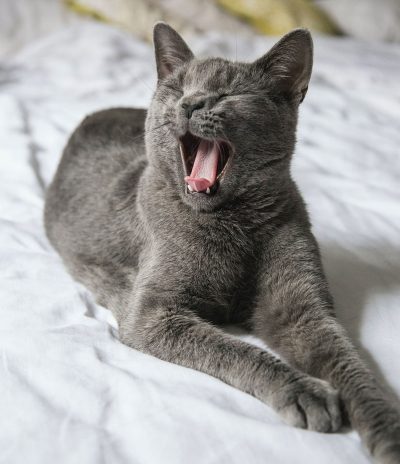 Cats have two distinct levels of sleep. The first is their light sleeping, through which they can wake up and react at any moment. This is the state that your cat usually sleeps in. However, the second state is their deep-sleep mode. This is where they, like humans, get the best sleep but they can’t access it as often as humans, because their instincts tell them they need to be alert in case predators come around.

Yet, when cats do have the opportunity to sleep soundly, research shows that cats do dream. You can tell when your feline buddy has achieved Rapid Eye Movement (REM) and dreaming when their whiskers twitch and their paws move.

The energy cats need to be healthy and happy is provided by a healthy diet of mainly meat products. Your furry friend is a ‘true carnivore’ which means they can survive on meat alone. They do not need any other nutrients in their system, even though they can and occasionally do eat other items besides meat.

However, there is a downside to this, at least when it comes to felines. Every cat from the house cat to the mountain lion has the same basic internal structure. Unlike humans (and dogs), the cat body does not store energy in preparation for depletion. Any energy they have they use and it takes a lot to hunt, even if they are just tackling their favorite cat-nip mouse. Thus, in preparation for the energy they will need for when their body tells them they need to hunt, they will sleep to preserve this energy.

Cats need protein. That is the main source of their livelihood. A cat without a regular source of protein will be lethargic and get sick easily, even if they are hydrated and fed. They need protein to survive. The issue with needing high levels of protein in your diet is that it is difficult to digest, even for a cat. Therefore, cats sleep to make the digestion process easier and to conserve the energy provided by the protein for when they need it most.

Cats are affected by the weather just like humans. Even if your cat has never spent a day outside, their instincts, in this way, will affect them just like yours. On rainy, cold days, even if you don’t go outside, just a look out the window can make you wish you could curl back into bed, and cats are the same way.

When it is bright and sunny outside, cats will likely stay awake longer than when it is rainy and cold.

A Sleepy Cat is a Healthy Cat

Changes in a cat’s sleeping behavior is an indication that the cat is ill. Cats never want to show weakness. So, before they get to the point where they stop eating, get lethargic, or offer some other signal of their failing health, cat parents need to pay attention to their fur baby’s everyday habits. If they are sleeping too little, they won’t have enough energy and they will become overly exhausted.

There is no such thing as too much sleep for a cat, though. Thus, you only need to worry if your cat is not sleeping.

To close, there are many different reasons why cats sleep so much. However, as long as your cat is maintaining their normal sleep patterns and they keep to a specific routine, their sleeping habits are normal. So, if your kitty is sleeping, let them dream…and try not to get too upset when they get up at night, thinking they’re on the hunt. It is just their instincts, after all!

About the Author: Laura Bethany