If you’ve just discovered your cat has kidney disease – you’re not alone. Chronic kidney disease is one of the most common conditions indoor cats will experience. The usual culprit is dehydration. As a result, the kidneys can’t properly filter down waste products. It causes a lot of urination, weakness, and loss of appetite.

The only way to confirm if your cat has kidney disease for sure is through an official test and diagnosis. Once you know your cat is struggling, it can feel worrisome and overwhelming as a cat parent to improve your cat’s condition. But we want to reassure you that it doesn’t have to be all downhill from here.

The good news is nutrition and diet plays a key role in slowing the progression of kidney disease in your cat!

So it’s time to get good food that eases kidney strain and promotes renal function (acid-base balance). Here are some important considerations before you commit to purchasing. But always double check with your vet to ensure it’s right for your kitty.

Cats with kidney issues may be unable to effectively filter toxins and waste products from the bloodstream. 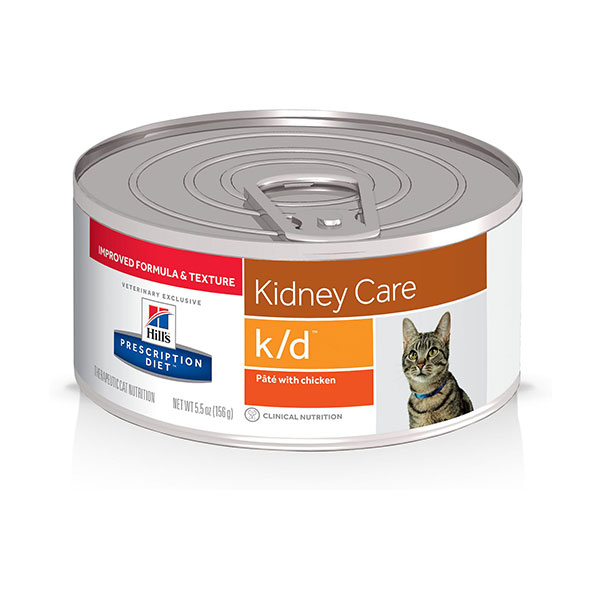 This means that consuming foods containing lots of carbs and fillers—or foods particularly dense in proteins and other traditionally desirable nutrients—may have a negative effect on their health. This can lead to decreased appetite and loss of muscle mass, among other problems.

As a result, cats with kidney disease (KD), need a clean, carefully restricted diet, using prescription wet food formulas such as this one from Hill’s. This recipe keeps things simple, with low amounts of clean protein from pork, liver, and chicken, with an extremely high moisture content to promote digestion. It’s made specifically to include low levels of phosphorus and sodium, and high amounts of Omega-3 and amino acids, the building blocks of protein.

Over 450 owners gave Hill’s KD formula a rating of 4.1 with commenters saying that, although it was sometimes difficult to get their cats to transition to this product, those that did make the switch often saw an improvement in their blood work results. One reviewer noticed that she was able to keep her cat interested in the formula by mixing it with small amounts of regular cat food.

Royal Canin’s KD prescription formula is developed to be high in antioxidants, compounds that help reduce levels of toxins in the blood. 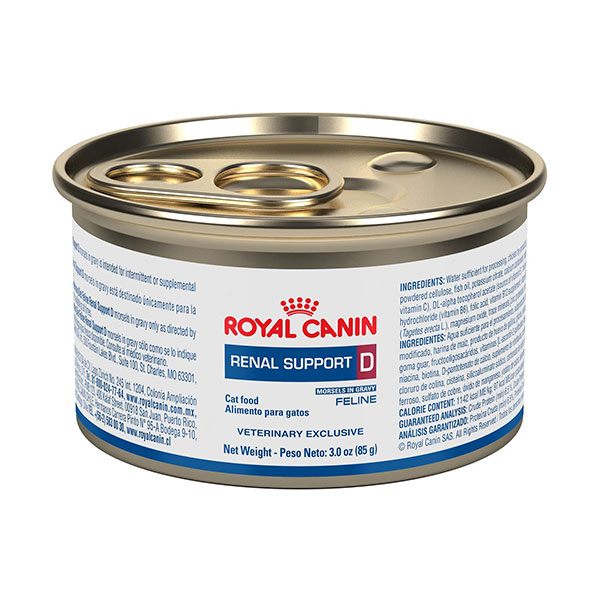 It’s also low in phosphorus and proteins, which means that underweight cats should be able to intake enough calories without impacting their kidney function.

However, we’re not so sure about the protein that is included in this formula. With such low levels on offer, we’d prefer to see some whole meat included, rather than chicken by-products being the primary protein.

One of the most highly-rated foods on this list, Royal Canin has received positive feedback from over 550 owners for their Renal Support formula. Reviews highlight the combination of low protein and low carbs, as well as how Royal Canin often seems to work for cats that refused other big-brand KD recipes.

Another reduced-protein and phosphorus option, this formula by Purina Pro is very similar to Royal Canin’s, using meat by-products to give calories while controlling protein levels. 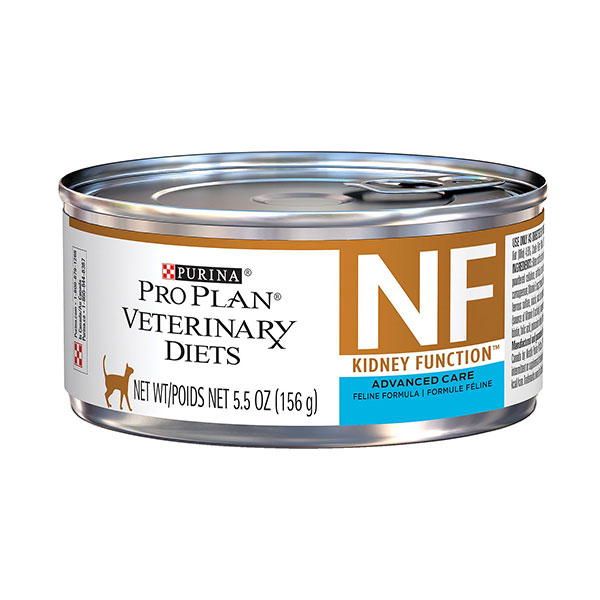 Again, this might make an enticing meal for moggies, but we’d prefer to see amino-rich whole meat being incorporated. In this recipe, the by-products and meals used are not from named animals, indicating that they’re of the lowest quality.

Many owners have noticed significant positive behavior changes in their pets after switching to Purina Pro. However, the formula also seems to divide opinion amongst cats, with a large number refusing to even try it out. This means that Purina gets a rating of 3.9 from just over 260 owners.

While dry foods are normally off the table for kitties with KD, this prescription recipe from Hill’s fits all the requirements for a kidney disease-friendly diet. 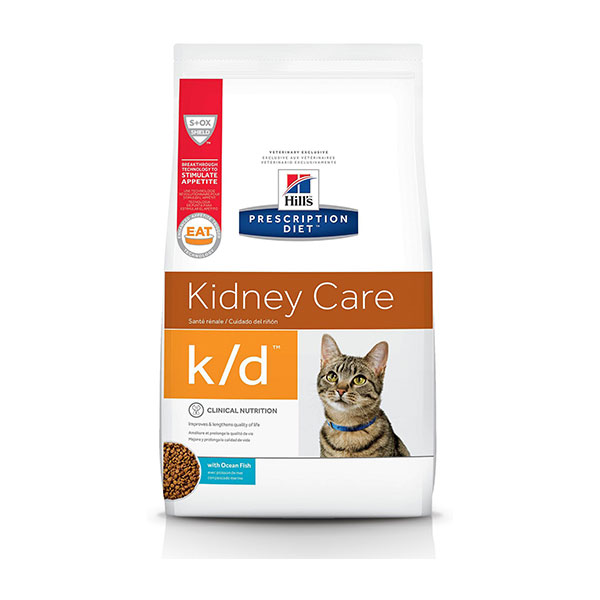 It’s low in protein and phosphorus, without resorting to the use of meat by-products or unnamed meals. It also incorporates Hill’s ‘Enhanced Appetite Trigger’ technology to help stimulate the appetite of underweight cats.

This product scores highly on both flavor and nutritional benefit, with most cats seeming to happily switch to Hill’s dry food, and see improvements in their blood test results. Despite some owners complaining about the price, this formula still gets a rating of 4.5 from over 290 owners.

This recipe from Blue Buffalo uses a “controlled” amount of real chicken, so it may not be suitable for cats in later-stage renal failure. 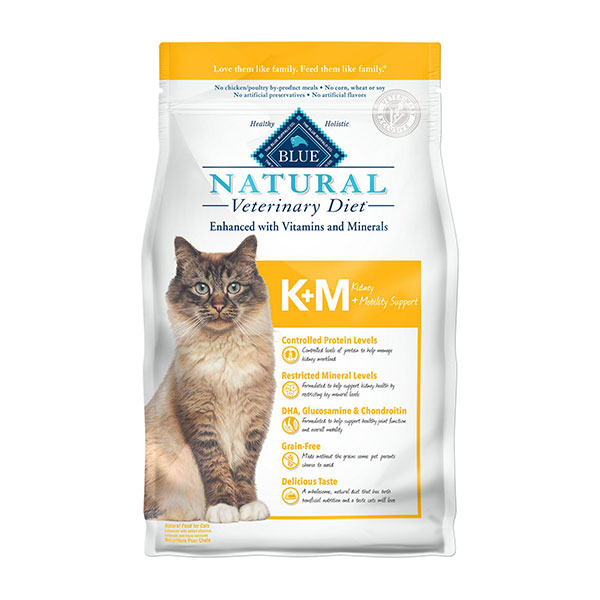 For those who can eat whole meats, however, here’s a formula that offers a grain-free, low phosphorus and sodium diet that’s packed with supplements. It also includes extra DHA, glucosamine, and chondroitin—all supplements known to promote better mobility and joint function.

With a stellar rating of 4.8, owners loved how excited their cats were about Blue Buffalo’s formula, with it often being the only KD recipe that their cats would accept. While this is great news, it may be because this recipe contains whole chicken, which some cats in later stage failure may not be able to tolerate. 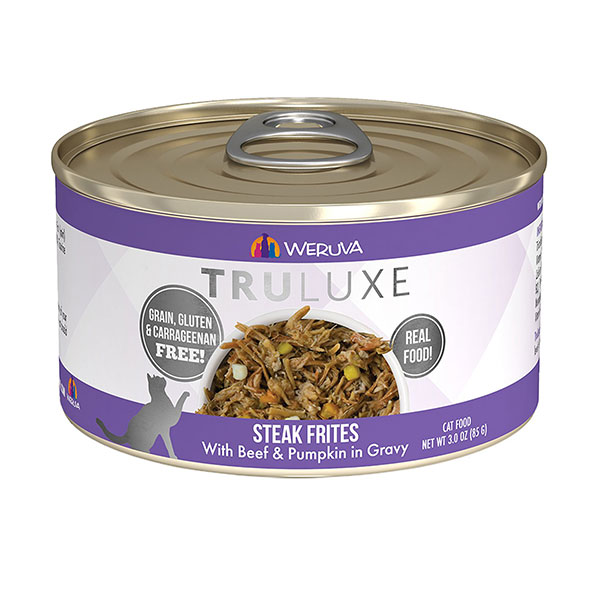 The broth-based gravy also makes it much more appealing to picky eaters than many of the formulas on this list.

Owners appreciated the balance between protein and phosphorus levels offered by Weruva, making it a good choice for cats who don’t quite need a prescription KD diet. One reviewer commented that “the cans are not fully filled, some are about 80% full” suggesting that value for money may be a question. Overall, however, the Weruva Truluxe Steak Frites gets a rating of 4.2 from over 110 owners.

Like their prescription dry formula, Blue Buffalo opts for real chicken in their non-prescription wet food, which is combined with chicken broth, chicken liver, and an assortment of fibrous vegetables. 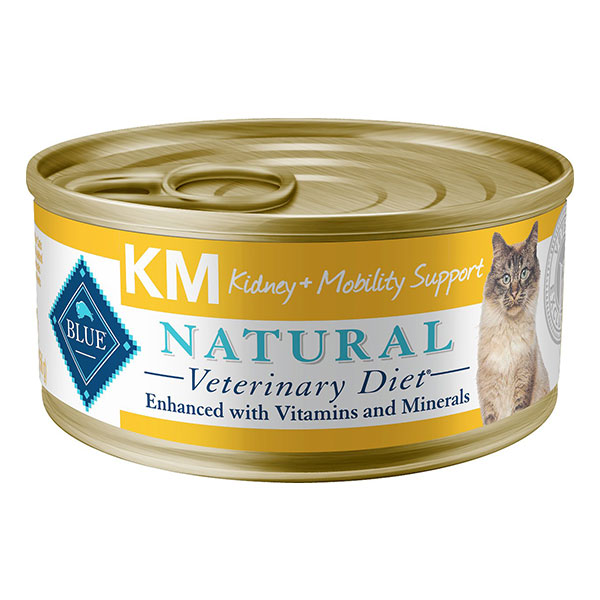 The result is a recipe that keeps protein within safe levels while still providing the nutritional support of real meat.

A rating of just 3.0 out of 5 from over 67 owners means that this product has the lowest reputation among owners of all the choices on this list. While many appreciated how Blue Buffalo has combined low phosphorus with real protein, a large number of cats simply refused to touch this wet food.

Cats with kidney issues who aren’t quite at the point of requiring a heavily restricted diet might benefit from this limited-ingredient, raw food formula by Instinct. 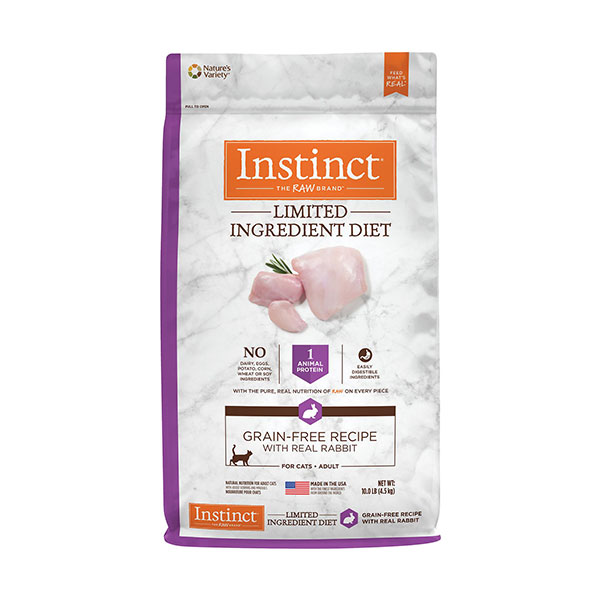 Because it’s a raw recipe, this formula has a much lower moisture content than traditional wet food, so it’s important that cats eating this food receive lots of additional hydration.

Owners of cats with IBD and other digestive issues are big fans of this formula, which often allows their cats to access real proteins without experiencing stomach upset. For cats with significant kidney problems, however, it may not meet their needs. Overall, Instinct’s freeze-dried raw rabbit formula gets a rating of 4.3 from over 285 owners.

Canned Wet Food is a Must

It’s crucial to boost your cat’s intake of water. In order to help your cat consume as much fluids as possible, consider switching to an all wet food diet. This will help the kidneys concentrate the urine effectively again.

Cat food that has lower levels of the above ingredients and minerals will reduce kidney strain. Decreased protein helps slow down kidney disease by alleviating work for the kidneys to excrete protein waste. Limiting phosphorus and sodium will also help reduce kidney impact and slow down the disease. These are the recommended ranges:

Yes – there is such a thing as healthy fats! Omega fatty acids are critical in your cat’s diet for maintaining low blood pressure and reducing inflammation. Look out for food that boasts omega-3 and omega-6 fatty acids.

All of the other factors don’t matter if your cat will barely touch the food. Of course, we can sometimes eat what we have to even if we don’t enjoy it. Cats, on the other hand, are notoriously picky. Ensure your cat has a liking to a particular food product before buying it in bulk!

Remember, your vet is there to help recommend and provide appropriate information for your kitty’s condition. Here’s a more detailed look at our top choices for kidney disease-formulated cat foods.